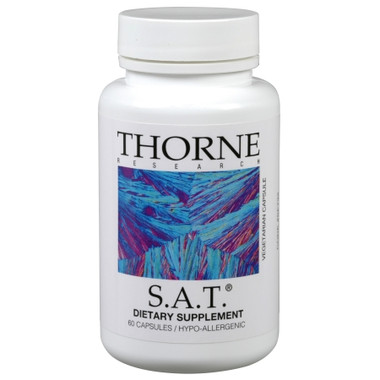 A well-researched, standardized botanical extract, milk thistle contains potent antioxidants that can protect liver cells from free radical damage, strengthen liver cell membranes, and help maintain the liver's built-in antioxidant system - glutathione and superoxide dismutase (SOD). In numerous studies, its active ingredient, silymarin, has been utilized to prevent liver cell damage by carbon tetrachloride, ethanol, acetaminophen, mushroom toxins, and benzopyrene from automobile exhaust. Silymarin has also been shown to help maintain the body's normal inflammatory response. Of the three flavonoids comprising silymarin, silybin predominates and is the most potent. Siliphos provides the benefits of silymarin (flavonoid complex from milk thistle) and phosphatidylcholine in one compound. Siliphos is a phytosome, a water-soluble flavonoid (in this case, silybin) made lipid-friendly by the addition of phosphatidylcholine. This allows for better incorporation of this liver-protective flavonoid into liver cell membranes. Studies indicate the silybin-phosphatidylcholine complex in Siliphos provides superior bioavailability compared to conventional milk thistle products.

Cynara scolymus (artichoke) has a long history of use in hepatic support. Turmeric has been used traditionally in both Chinese and Ayurvedic medicine to support liver function. The primary efficacious agent is the yellow pigment curcumin. Curcumin's hepatoprotective activity is likely due to its strong antioxidant activity and potential to maintain the body's normal inflammatory response. Binding curcumin to the hepatoprotective phospholipid phosphatidylcholine (as Meriva) not only increases bioavailability but enhances its hepatoprotective effects.

Take 1 capsule two to three times daily or as recommended by your health-care practitioner.

All prices are in USD. Copyright 2021 Myhealthstore.com. Sitemap | Ecommerce Solution by BigCommerce