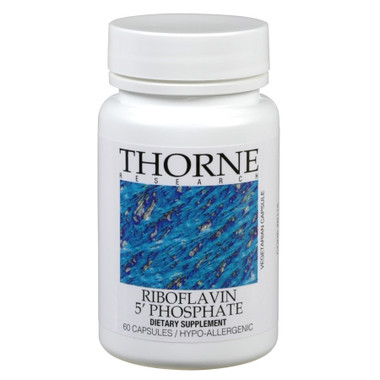 Riboflavin, also known as vitamin B2, plays a key role in  the activation and conversion of other B vitamins. For instance, it is  necessary for activation of vitamin B6, conversion of tryptophan to niacin, and  conversion of folate to its various active forms. Riboflavin also plays a  crucial role in fat and glucose metabolism, red blood cell synthesis, and the  production and regulation of certain hormones.

As with many B vitamins, riboflavin must be converted to its  active form – riboflavin 5'-phospate (R5P) – in order for it to be utilized by  the body. Because absorption of riboflavin occurs in the upper GI tract, a  compromised digestive system can adversely affect the body's ability to convert  riboflavin to R5P. In addition, certain prescription medications can interfere  with the proper absorption of riboflavin and deplete the body of its stores.

Take 1 capsule one to three times daily or as recommended by your health-care practitioner.

All prices are in USD. Copyright 2020 Myhealthstore.com. Sitemap | Ecommerce Solution by BigCommerce